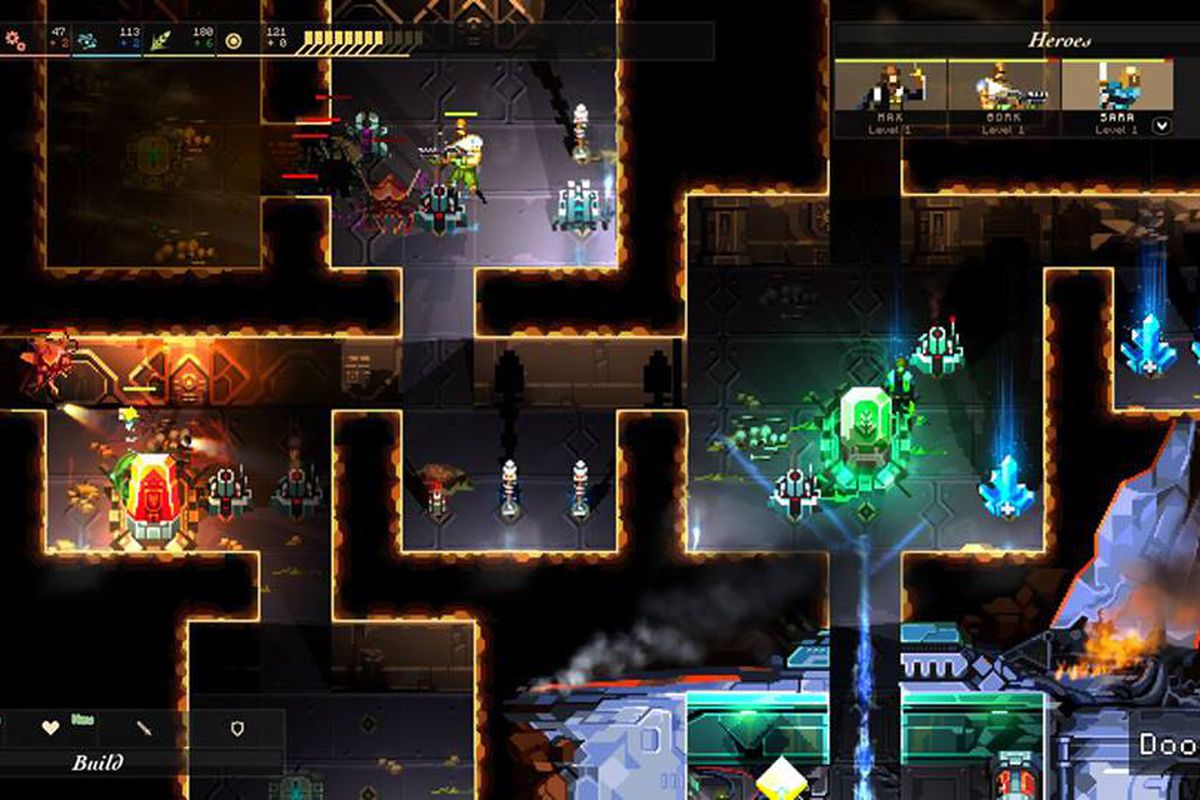 The setting and rules are phenomenal at simulating looong periods of time over looong distances, tracking your party as they make pilgrimage through a psychedelic landscape over multiple timezones. Along the way you might come across Discoveries - strange ruins or settlements of the long-ago forgotten times potentially brimming with treasure and technology.

One small trade-off is the rules don't really help with smaller distances and times like meters and minutes pottering around a dungeon.

You could just use rules from D&D or another system, but you risk making the game too nitty-gritty and dungeon-centric, and soon you've forgotten about the wild, wide steppe and you're spending eight consecutive sessions hauling gold pieces out of a three-level crypt, tapping every brick with a 10' pole. That's not UVG.

A dungeon is broken into thematic areas instead of specific rooms, corridors etc. If it's really important for whatever reason, you can specify that Area 3 can only be reached through Area 2, but broadly I won't be paying attention to how the spaces connect.

The way I plan to use this is have the areas be encountered broadly in the order I write them. This means I can invent the dungeon on the fly, coming up with a few starter areas and having time to think up later areas mid-session while the starting areas distract the players.
Exploring an area takes an Hour. In fact, most interesting actions take an Hour. Unless it's really obviously a short activity, always err on the side of making things last an Hour.

By "exploring" we assume the players, like in Fallout or Skyrim, creeps around half-crouched in the dark for ages, tentatively poking their heads around corners and looking in random rusty filing cabinets or anything vaguely eye-catching until they loop around on themselves and have a good understanding of the topography of the space.

At this point you should let them know about anything especially interesting. Maybe have a few bullet points next to each area
This isn't essential. Again, only write details if you're struck with inspiration. Or ask the players what they see. If you're already being fast and loose with details, no harm in letting players add to the brainstorm.

Optional Rule: Number the areas in a list and roll a d6 every time they press deeper. If you have more than 6 areas, you count up from 1 and skip any already explored (so if you've been to Area 3 and roll a 6 you go 1, 2, 4, 5, 6, 7) so higher areas are necessarily deeper inside and impossible to reach immediately.

By doing certain things you accrue Alarm Dice (a d6). These represent how the dungeon is waking up, and reacting to, your presence. You gain Alarm Dice by

You check for encounters against Alarm Dice by rolling all of your accumulated Alarm Dice and looking at the results and comparing against your Encounter and Treasure tables.

Thus you will not encounter or discover encounters and treasures higher on their lists until you have spent longer in the dungeon. For encounters this means they should represent the inhabitants of the dungeon becoming steadily more aware of and (probably) more hostile to your presence.

You could have a 0th entry for some thematic environmental effect if no 1s are rolled. Perhaps lava, or your torches die, or a haunting voice says something cryptic about the fate of this long-forgotten place, or you spot a security camera looking at you.

Optional Rule: Write a dungeon-wide reaction table staggered by accumulated Alarm dice. You can assign more than just attitude to the table e.g. number of monsters, how aware they are of your presence etc.

Optional Rule: You could use the other dice numbers to inform your decisions further. Perhaps the number of 2s represents how concentrated the poison gas is in your poison-gas-mine dungeon, or perhaps you map the number of enemies in an encounter to the number of rolled 4s (e.g. one 4 = 1 monster, four 4s = a group of monsters etc.)

Benefits to this system

The longer the party explore, the more aggressive and concerted the response becomes, but the more riches they will potentially uncover. This encourages hit-and-run approaches to dungeoncrawling.

This system means you don't need to worry about writing up dungeons ahead of time (especially helpful in UVG where dungeons are optional side-locations players may or may not explore). All you need is 1 or 2 starting areas, 1 or 2 monsters, and 1 or 2 treasure ideas, and you can write the others on-the-fly.

The nature of the monster-to-alarm intensity correlation is that you could just have one type of monster of increasing hostility if you can't or don't want more types of enemy.

1. Gary, thought he heard a noise
2. Gary, tentatively looking for you
3. Gary, firmly asking you to leave
4. Gary, threatening to call the police
5. Gary, armed and dangerous
6. Gary, panicky with a grenade

July 29, 2019
In my anticipation of Luka Rejec's radioactively exciting  Ultraviolet Grasslands , I've written the roleplaying rules-and-settings equivalent of fanfiction. I've made my own rules based off of Troika (via  David Schirduan ) and Moonhop , and I've cobbled together my own setting which crossbred UVG with a few other sources (Fever-Dreaming Marlinko, Against the Wicked City, and Luka's other, as-yet-unpublished work, Red Sky Dead City) and stretched them across real-world Central Asia. My three players were starting waaay to the east, in the City of Flowers on the western periphery of the Empire of Everything. Using UVG's Travel Quests table they established that the Cult of Everflowering Life (the bureaucracy that maintains the computational H.I. (Horticultural Intelligence) of networked flowerbeds, pollinators, and gardens that runs the City) had given them a Letter of Marque to go fuck with one of the City's many rivals out west on the steppe. Come
2 comments
Read more

January 06, 2019
Made some random teas. The names are a bit weird - I wanted them to serve as the description without further elaboration, but also be vague enough that players are almost garunteed to get the wrong end of the stick for how most of them work. Nearly all of them last 24 hours. This isn't necessarily a good idea, it's just easier for me to track. Change that to 1d6 hours or whatever if you want. I dunno how much these cost. I'm not an authority. I'm just saying that because I have a habit of viewing other random tables and content online as gospel and worrying about "using them wrong" so here's a carte blanche to ignore everything I say you think is dumb. This is a d66 table just like all the good stuff coming out of Troika! - you roll 2 d6s and count them as the 10s and 1s of a single number. 11        Smokey Lung Wa Chai Breathe grey smoke like dry ice in a 5' radius around you, obscuring yourself. 12        Moon Lotus Enlightened Br
Post a Comment
Read more