This class uses terminology that relates to my in-progress homebrew rules. The only thing that really matters is the concept of Luck - which exists as a sort of replacement for Saving Throws (see Troika! for how I essentially use Luck). Whenever the rules expect you to "roll Luck" then substitute whatever you find most applicable - saving throw, reaction roll, spell save DC or whatever. Whenever it asks you to "spend Luck" consider replacing this with a "once per day" caveat or "spend 1 HP" if you're into that.

Is this just a rogue with free level-up magic items that have limited battery life? Sure, I guess you could call it that.

You are an acrobatic vigilante, folk-hero, and rake
the sort that features in the stories told to kids - the trickster-vagabond who makes fools of the pompous and always bites off more than they can chew. But you're not alone on your travels. You weave the worship of devata - the little gods - into your tools, your clothes, your weapons, and they take care of you. 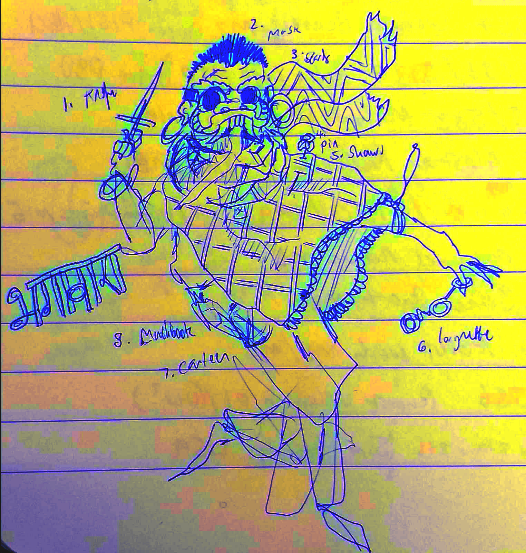 [I don't use this stuff but if you do then here it is:]
Requirements: none
Prime Requisite: idk Dexterity I guess?
Hit Dice & Saves: as Thief

[The Knife can take up an inventory space if you play that way, the shawl and scarf are worn (if that counts for inventory in your system, so be it) and the rest is so tiny and lightweight it hardly matters]

Mantra of the Lucky

Your devata see to it that you’re never without small luxuries. Your canteen always has a little bit of something left in it, and your crumpled cigarette packet always contains three cigarettes, and your box of matches always contains three matches. (You can’t use this ability to give out infinite cigarettes and booze to loads of other people in an attempt to make money; the devata will resent the abuse, and cease to aid you.)

When the GM has established details about a person, place, location, or situation, you may spend a point of Luck to add a single detail of your own in the form of a sentence that begins with the phrase “Yes, and fortunately…”. The GM must accept this detail as established, although they may tidy up the edges of context to fit established facts (e.g. you didn’t meet the mayor, as this is a druidic village, you do however meet the chief druid).

When you humiliate or aggravate someone to the point of aggression, you can goad or trick them. You can have them do anything a furious person could reasonably do (e.g. they could charge at you and fall over, or reach for their dagger only to discover you have it in your hand, or angrily admit to a crime).

The supernatural utility of a godthief’s god-tools are a finite resource. Over time the interred spirit may become weak or sullen from a lack of devotion.

When your tools do anything supernatural (i.e. it’s natural tie a knot with your scarf, but when you make the scarf tie itself into a knot that’s ‘supernatural’) make a Luck roll. On a fail the item is depleted. To replenish devata-powers, you must complete a task or ritual unique to that tool. The list of possible tasks are outlined at the bottom of this class.

Godthieves capture or collaborate with devata and enshrine them within their tools with secretive and laborious rituals. These god-tools obey your commands and perform complex and seemingly-miraculous tasks, but in return expect devotion or appeasement.

The day after a Godthief advances in level they walk alone in the forgotten alleys, forests, and gullies of the world and find and bind a new devata to their equipment. Roll a d8 to discover what their power is. If you re-roll the same ability you gain a second ability or upgrade but keep the same devata and its associated demands.

Every devata has its own personality. When you gain a new devata roll on the following table to see what it requires to win its cooperation and replenish item usage (as described in Little Worships above):

The setting and rules are phenomenal at simulating looong periods of time over looong distances, tracking your party as they make pilgrimage through a psychedelic landscape over multiple timezones. Along the way you might come across Discoveries - strange ruins or settlements of the long-ago forgotten times potentially brimming with treasure and technology.

One small trade-off is the rules don't really help with smaller distances and times like meters and minutes pottering around a dungeon.

You could just use rules from D&D or another system, but you risk making the game too nitty-gritty and dungeon-centric, and soon you've forgotten about the wild, wide steppe and you're spending eight consecutive sessions hauling gol…
1 comment
Read more

January 06, 2019
Made some random teas. The names are a bit weird - I wanted them to serve as the description without further elaboration, but also be vague enough that players are almost garunteed to get the wrong end of the stick for how most of them work.

Nearly all of them last 24 hours. This isn't necessarily a good idea, it's just easier for me to track. Change that to 1d6 hours or whatever if you want.

I dunno how much these cost. I'm not an authority. I'm just saying that because I have a habit of viewing other random tables and content online as gospel and worrying about "using them wrong" so here's a carte blanche to ignore everything I say you think is dumb.

This is a d66 table just like all the good stuff coming out of Troika! - you roll 2 d6s and count them as the 10s and 1s of a single number.

I've made my own rules based off of Troika (via David Schirduan) and Moonhop, and I've cobbled together my own setting which crossbred UVG with a few other sources (Fever-Dreaming Marlinko, Against the Wicked City, and Luka's other, as-yet-unpublished work, Red Sky Dead City) and stretched them across real-world Central Asia.

My three players were starting waaay to the east, in the City of Flowers on the western periphery of the Empire of Everything. Using UVG's Travel Quests table they established that the Cult of Everflowering Life (the bureaucracy that maintains the computational H.I. (Horticultural Intelligence) of networked flowerbeds, pollinators, and gardens that runs the City) had given them a Letter of Marque to go fuck with one of the City's many rivals out west on the steppe. Come the first se…
Post a Comment
Read more